Redwood Directives are a powerful feature, supercharging your GraphQL-backed Services.

You can think of directives like "middleware" that let you run reusable code during GraphQL execution to perform tasks like authentication and formatting.

Redwood uses them to make it a snap to protect your API Services from unauthorized access.

Here we call those types of directives Validators.

You can also use them to transform the output of your query result to modify string values, format dates, shield sensitive data, and more! We call those types of directives Transformers.

You'll recognize a directive as being 1) preceded by @ (e.g. @myDirective) and 2) declared alongside a field:

or a Query or a Mutation:

You can also define arguments that can be extracted and used when evaluating the directive:

or a Query or Mutation:

You can also use directives on relations:

There are many ways to write directives using GraphQL tools and libraries. Believe us, it can get complicated fast.

But, don't fret: Redwood provides an easy and ergonomic way to generate and write your own directives so that you can focus on the implementation logic and not the GraphQL plumbing.

What is a Redwood Directive?​

Redwood directives are purposeful. They come in two flavors: Validators and Transformers.

Whatever flavor of directive you want, all Redwood directives must have the following properties:

Since it helps to know a little about the GraphQL phases—specifically the Execution phase—and how Redwood Directives fit in the data-fetching and authentication flow, let's have a quick look at some diagrams.

First, we see the built-in @requireAuth Validator directive that can allow or deny access to a Service (a.k.a. a resolver) based on Redwood authentication. In this example, the post(id: Int!) query is protected using the @requireAuth directive.

If the request's context has a currentUser and the app's auth.{js|ts} determines it isAuthenticated(), then the execution phase proceeds to get resolved (for example, the post({ id }) Service is executed and queries the database using Prisma) and returns the data in the resulting response when execution is done. 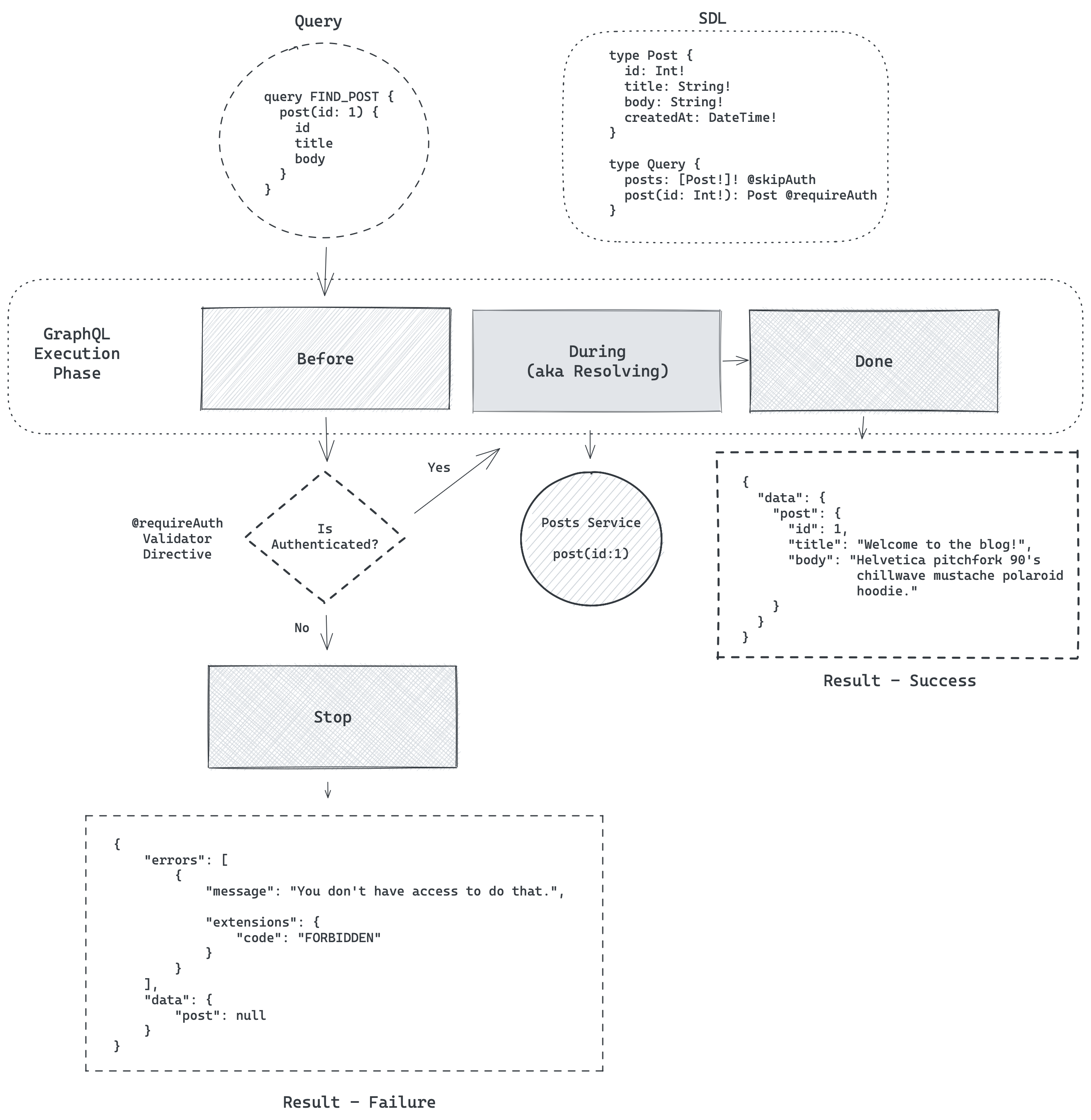 In this second example, we add the Transformer directive @welcome to the title field on Post in the SDL.

The GraphQL Execution phase proceeds the same as the prior example (because the post query is still protected and we'll want to fetch the user's name) and then the title field is resolved based on the data fetch query in the service.

Finally after execution is done, then the directive can inspect the resolvedValue (here "Welcome to the blog!") and replace the value by inserting the current user's name—"Welcome, Tom, to the blog!" 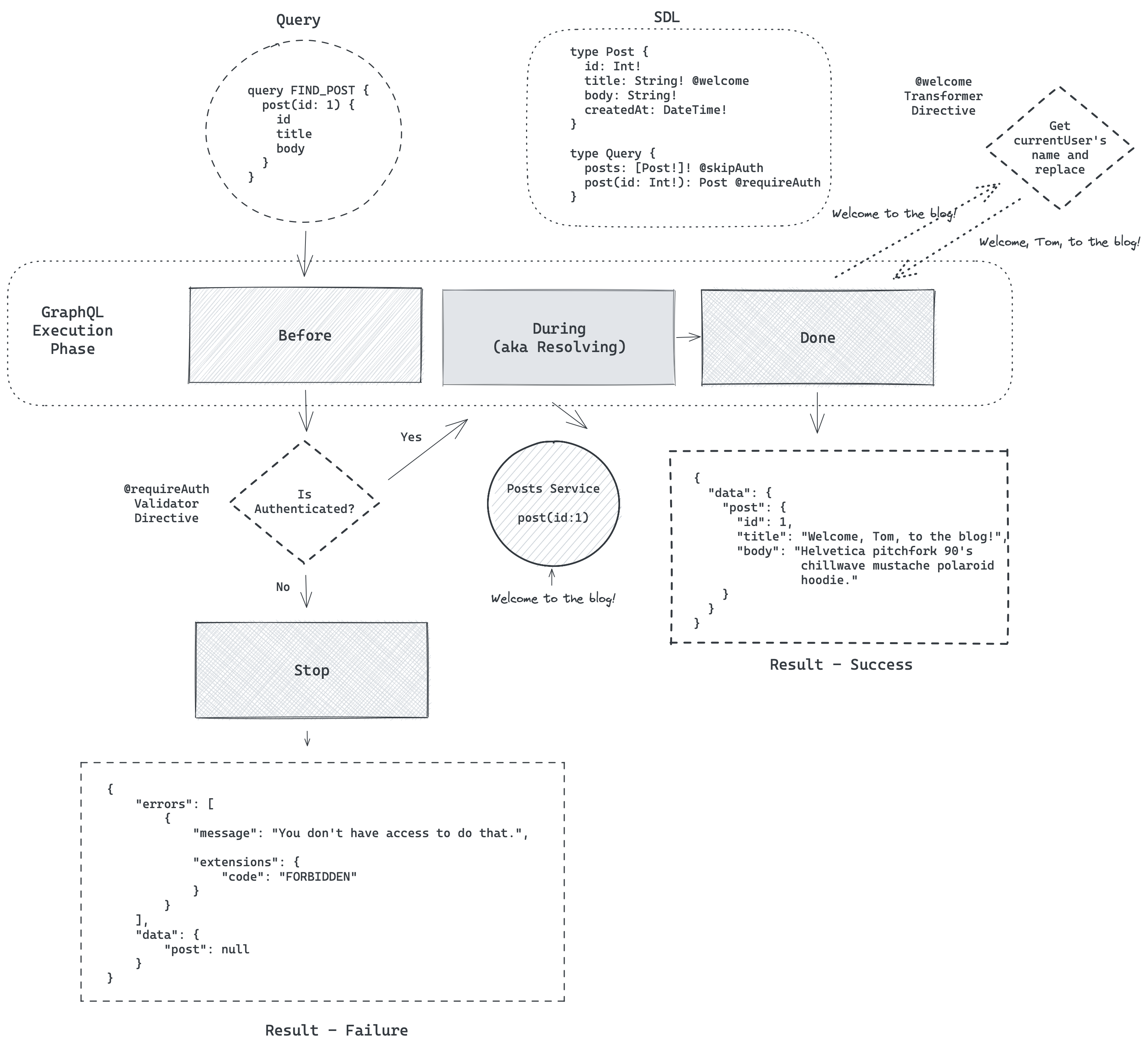 Validators integrate with Redwood's authentication to evaluate whether or not a field, query, or mutation is permitted—that is, if the request context's currentUser is authenticated or belongs to one of the permitted roles.

Validators should throw an Error such as AuthenticationError or ForbiddenError to deny access and simply return to allow.

Here the @isSubscriber validator directive checks if the currentUser exists (and therefore is authenticated) and whether or not they have the SUBSCRIBER role. If they don't, then access is denied by throwing an error.

Since validator directives can access arguments (such as roles), you can quickly provide RBAC (Role-based Access Control) to fields, queries and mutations.

All Redwood apps come with two built-in validator directives: @requireAuth and @skipAuth. The @requireAuth directive takes optional roles. You may use these to protect against unwanted GraphQL access to your data. Or explicitly allow public access.

Note: Validators evaluate prior to resolving the field value, so you cannot modify the value and any return value is ignored.

Transformers can access the resolved field value to modify and then replace it in the response. Transformers apply to both single fields (such as a User's email) and collections (such as a set of Posts that belong to Users) or is the result of a query. As such, Transformers cannot be applied to Mutations.

Note: you can chain directives to first validate and then transform, such as @requireAuth @maskedEmail. Or even combine transformations to cascade formatting a value (you could use @uppercase together with @truncate to uppercase a title and shorten to 10 characters).

Since transformer directives can access arguments (such as roles or maxLength) you may fetch those values and use them when applying (or to check if you even should apply) your transformation.

That means that a transformer directive could consider the permittedRoles in:

and if the currentUser is an ADMIN, then skip the masking transform and simply return the original resolved field value:

and you would use it in your SDLs like this:

Where can I use a Redwood Directive?​

A directive can only appear in certain locations in a GraphQL schema or operation. These locations are listed in the directive's definition.

In the example below, the @maskedEmail example, the directive can only appear in the FIELD_DEFINITION location.

An example of a FIELD_DEFINITION location is a field that exists on a Type:

When Should I Use a Redwood Directive?​

As noted in the GraphQL spec:

Directives can be useful to get out of situations where you otherwise would need to do string manipulation to add and remove fields in your query. Server implementations may also add experimental features by defining completely new directives.

Here's a helpful guide for deciding when you should use one of Redwood's Validator or Transformer directives:

Now that you've seen what Validator and Transformer directives look like and where and when you may use them, you may wonder: can I use them together? Can I transform the result of a transformer?

The answer is: yes—yes you can!

Combine Directives on a Query and a Type Field​

Let's say you want to only allow logged-in users to be able to query User details and you only want un-redacted email addresses to be shown to ADMINs.

You can apply the @requireAuth directive to the user(id: Int!) query so you have to be logged in. Then, you can compose a @maskedEmail directive that checks the logged-in user's role membership and if they're not an ADMIN, mask the email address:

Or, let's say I want to only allow logged in users to be able to query User details.

But, I only want ADMIN users to be able to query and fetch the email address.

I can apply the @requireAuth directive to the user(id: Int!) query so I have to be logged in.

And, I can apply the @requireAuth directive to the email field with a role argument.

Now, if a user who is not an ADMIN queries:

They will get a result.

But, if they try to query:

They will be forbidden from even making the request.

Chaining a Validator and a Transformer​

Similar to the prior example, you may want to chain directives, but the transform doesn't consider authentication or role membership.

For example, here we ensure that anyone trying to query a User and fetch the email must be authenticated.

And then, if they are, apply a mask to the email field.

If your request event headers includes geographic or timezone info, you could compose a custom Transformer directive called @localTimezone could inspect the header value and convert the createdAt from UTC to local time -- something often done in the browser.

Then, you can chain the @dateFormat Transformer, to just return the date portion of the timestamp -- and not the time.

Note: These directives could be alternatively be implemented as "operation directives" so the client can use them on a query instead of the schema-level. These such directives are a potential future Redwood directive feature.

Redwood makes it easy to code, organize, and map your directives into your GraphQL schema. Simply add them to the directives directory and the createGraphQLHandler does all the work.

You simply add them to the directives directory and the createGraphQLHandler will do all the work.

Note: Redwood has a generator that will do all the heavy lifting setup for you!

Secure by Default with Built-in Directives​

By default, your GraphQL endpoint is open to the world.

That means anyone can request any query and invoke any Mutation. Whatever types and fields are defined in your SDL is data that anyone can access.

If not, then your build will fail:

or your server won't startup and you should see that "Schema validation failed":

To correct, just add the appropriate directive to your queries and mutations.

If not, then your build will fail and your server won't startup.

It's your responsibility to implement the requireAuth() function in your app's api/src/lib/auth.{js|ts} to check if the user is properly authenticated and/or has the expected role membership.

The @requireAuth directive will call the requireAuth() function to determine if the user is authenticated or not.

Note: The auth.ts file here is the stub for a new RedwoodJS app. Once you have setup auth with your provider, this will enforce a proper authentication check.

If, however, you want your query or mutation to be public, then simply use @skipAuth.

Want to write your own directive? You can of course! Just generate one using the Redwood CLI; it takes care of the boilerplate and even gives you a handy test!

When using the yarn redwood generate command, you'll be presented with a choice of creating a Validator or a Transformer directive.

Note: You can pass the --type flag with either validator or transformer to create the desired directive type.

After picking the directive type, the files will be created in your api/src/directives directory:

Let's create a @isSubscriber directive that checks roles to see if the user is a subscriber.

Next, implement your validation logic in the directive's validate function.

Validator directives don't have access to the field value, (i.e. they're called before resolving the value). But they do have access to the context and directiveArgs. They can be async or sync. And if you want to stop executing (because of insufficient permissions for example), throw an error. The return value is ignored

An example of directiveArgs is the roles argument in the directive requireAuth(roles: "ADMIN")

Here we can access the context parameter and then check to see if the currentUser is authenticated and if they belong to the SUBSCRIBER role:

When writing a Validator directive test, you'll want to:

Since we stub out the Error('Implementation missing for isSubscriber') case when generating the Validator directive, these tests should pass. But once you begin implementing the validate logic, it's on you to update appropriately.

If your Validator Directive is asynchronous, you can use mockAsyncRedwoodDirective instead.

Let's create a @maskedEmail directive that checks roles to see if the user should see the complete email address or if it should be obfuscated from prying eyes:

Next, implement your validation logic in the directive's transform function.

Take note of the resolvedValue:

It contains the value of the field on which the directive was placed. Here, email. So the resolvedValue will be the value of the email property in the User model, the "original value" so-to-speak.

When you return a value from the transform function, just return a modified value and that will be returned as the result and replace the email value in the response.

You must return a value of the same type. So, if your resolvedValue is a String, return a String. If it's a Date, return a Date. Otherwise, your data will not match the SDL Type.

When writing a Transformer directive test, you'll want to:

Since we stub out and mock the mockedResolvedValue when generating the Transformer directive, these tests should pass.

Here we mock the value foo and, since the generated transform function replaces foo with bar, we expect that after execution, the returned value will be bar. But once you begin implementing the validate logic, it's on you to update appropriately.

If your Transformer Directive is asynchronous, you can use mockAsyncRedwoodDirective instead.