You may not have noticed, but when you're making GraphQL calls, you're actually calling a Function (not to be confused with a Javascript function) on the API side. Capital-F Functions are meant to be deployed to serverless providers like AWS Lambda. (We're using Netlify's nomenclature when we call them Functions.)

Did you know you can create your own Functions that do whatever you want? Normally we recommend that if you have custom behavior, even if it's unrelated to the database, you make it available as a GraphQL field so that your entire application has one, unified API interface. But rules were meant to be broken!

How about a custom Function that returns the timestamp from the server?

That creates a stub you can test out right away. Make sure your dev server is running (yarn rw dev), then point your browser to http://localhost:8910/.redwood/functions/serverTime. 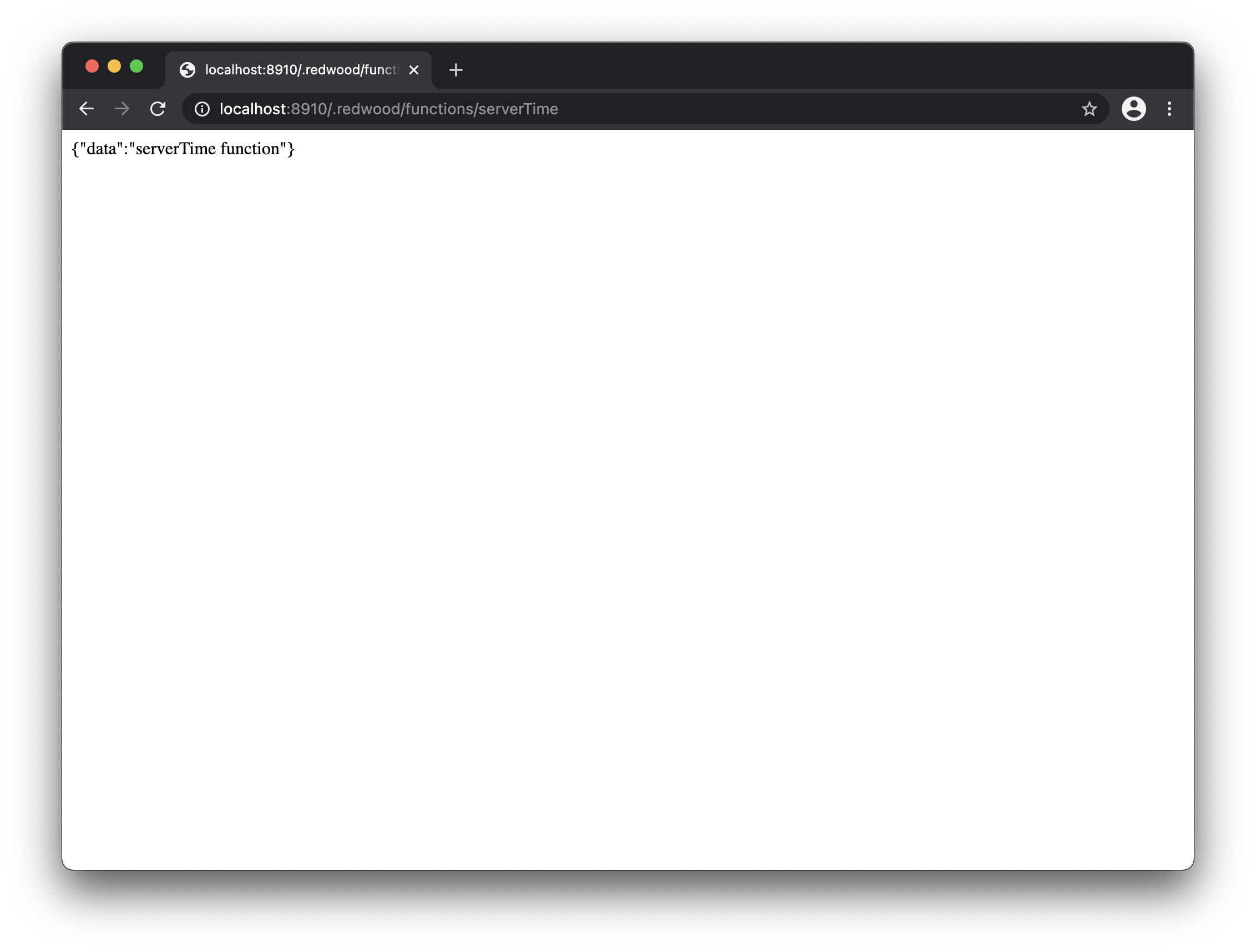 The .redwood/functions bit in the link you pointed your browser to is what's called the apiUrl. You can configure it in your redwood.toml:

After you setup a deploy (via yarn rw setup deploy <provider>), it'll change to something more appropriate, like .netlify/functions in Netlify's case.

Why do we need apiUrl? Well, when you go to deploy, your serverless functions won't be in the same place as your app; they'll be somewhere else. Sending requests to the apiUrl let's your provider handle the hard work of figuring out where they actually are, and making sure that your app can actually access them.

If you were to try and fetch http://localhost:8911/serverTime from the web side, you'd run into an error you'll get to know quite well: CORS.

Time for an interlude within an interlude, because that's how you'll always feel when it comes to CORS: you were doing something else, and then No 'Access-Control-Allow-Origin' header is present on the requested resource. Now you're doing CORS.

from the web side would give you an error like:

We could set the headers for serverTime to allow requests from any origin... but maybe a better idea would be to never request 8911 from 8910 in the first place. Hence the apiUrl! We're making a request to 8910/.redwood/functions/serverTime—still the same domain—but the webpack dev-server proxies them to localhost:8911/serverTime for us.

Ok—back to our custom Function. Let's get the current time and return it in the body of our handler: 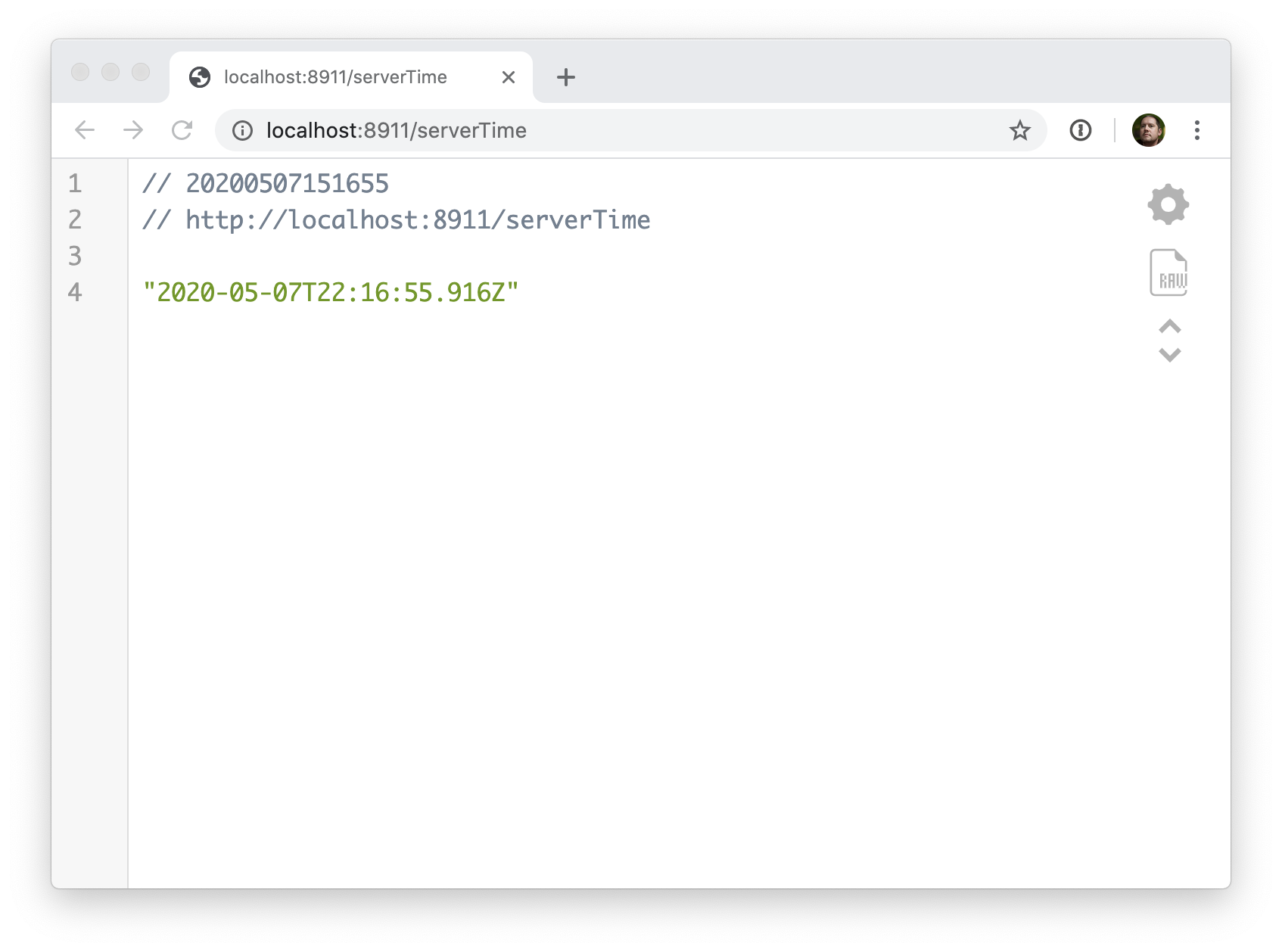 Here we're using a Chrome extension that prettifies data that could be identified as JSON. In this case, the date is wrapped in quotes, which is valid JSON, so the extension kicks in.

How about we make sure the response is a JSON object: 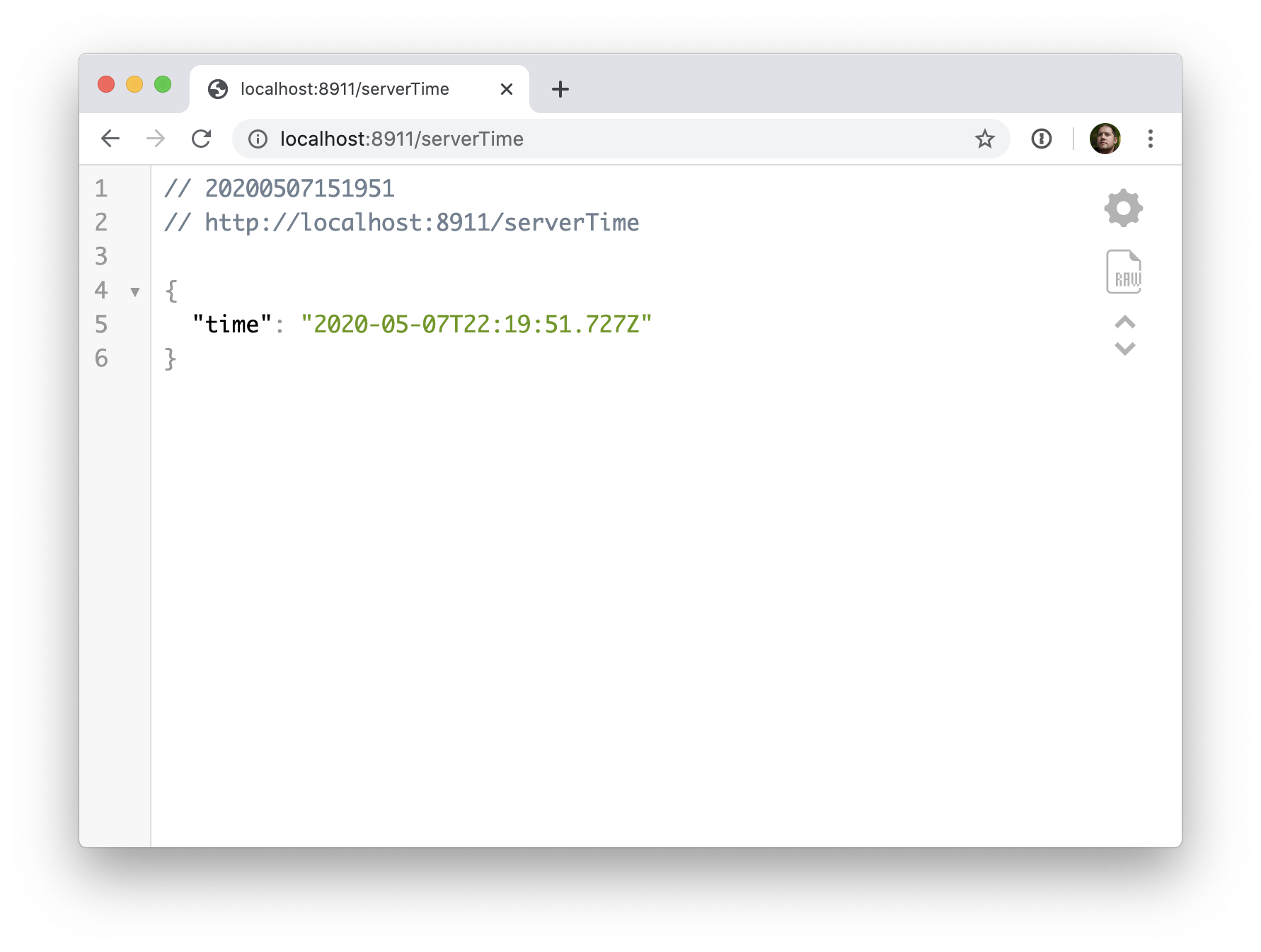 Note that Node.js doesn't have ES module support (yet), but we use Babel to transpile during the build phase so you can still use import syntax for external packages in your Functions.

Since you are most definitely an elite hacker, you probably noticed that our new endpoint is available via all HTTP methods: GET, POST, PATCH, etc. In the spirit of REST, this endpoint should really only be accessible via a GET.

Again, because you're an elite hacker you definitely said "excuse me, actually this endpoint should respond to HEAD and OPTIONS methods as well." Okay fine, but this is meant to be a quick introduction, cut us some slack! Why don't you write a recipe for us and open a PR, smartypants??

Inspecting the event argument being sent to handler gets us all kinds of juicy details on this request:

Take a look in the terminal window where you're running yarn rw dev to see the output:

That first entry, httpMethod, is what we want. Let's check the method and return a 404 if it isn't a GET:

It's tough to test other HTTP methods in the browser without installing an extension, but we can do it from the command line with curl:

And just to be sure, let's make that same request with a GET (curl's default method):

If you leave the -I flag on then curl will default to a HEAD request! Okay fine, you were right elite hacker!

Redwood uses the async/await version of Function handlers, but you can also use the callback version. In that case your Function would look something like:

Yeah, kinda gross. What's with that null as the first parameter? That's used if your handler needs to return an error. More on callback-based handlers can be found in Netlify's docs.

The callback syntax may not be too bad for this simple example. But, if you find yourself dealing with Promises inside your handler, and you choose to go use callback syntax, you may want to lie down and rethink the life choices that brought you to this moment. If you still want to use callbacks you had better hope that time travel is invented by the time this code goes into production, so you can go back in time and prevent yourself from ruining your own life. You will, of course, fail because you already chose to use callbacks the first time so you must have been unsuccessful in stopping yourself when you went back.

Trust us, it's probably best to just stick with async/await instead of tampering with spacetime.

We hope this gave you enough info to get started with custom Functions, and that you learned a little something about the futility of trying to change the past. Now go out and build something awesome!